It has been a great start to the month of September and we are now halfway through our Culture and Heritage Month. While our first weekend got off to a slow start, after having to postpone the boat trip due to inclement weather, it went very well on Sunday past. The group thoroughly enjoyed it and were treated to a brilliant tour with Denis O’Hara. Hopefully we will be able to do it again in the future! The talk with the Redbay Lifeboat and Glens of Antrim Historical Society was truly fascinating and really captured the maritime history of our unique coastline. 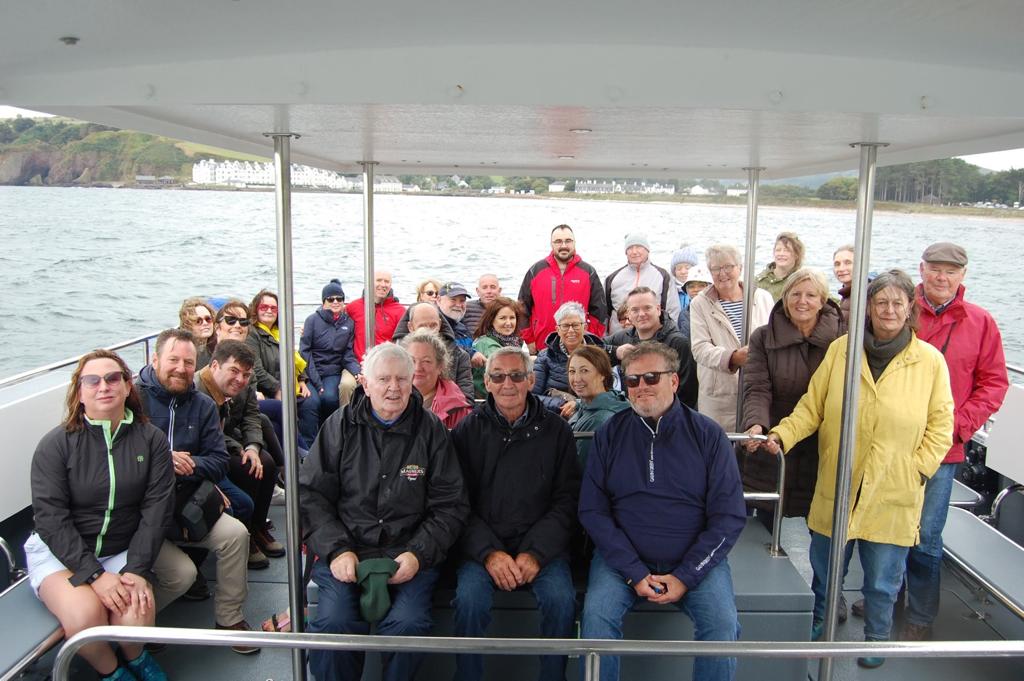 The incoming weekend features more music from Manny, Niall Patterson, Gerry McLean, Aloyisius & Rian Patterson – who are back by popular demand. They will kick off at 8pm this Friday night 16 September and you can book tickets online, which I highly recommend, following the packed house they commanded in July!

On Saturday, we are honoured to have writer Bernie McGill in our midst. Bernie will be delivering a creative writing workshop on Saturday morning – which is all sold out. But you can hear her reading from her acclaimed novel that afternoon at 3pm. It will be a stimulating event and you can book tickets here.

On Sunday morning 18 September, we have another event for the little ones – a baby disco. Come along for tunes and tots – fun for the wee ones in our atmospheric building! Later that dance our dance theme continues, as we have a Taster Dance workshop with Philip Johnston who will lead us through  an Introduction to Modern Dance: Exploring movement, space and individual creativity. Get your tickets here – limited to 12 spaces.

Unfortunately, due to unforeseen circumstances, Dr Éamon Phoenix has had to cancel his scheduled lecture.  On his recommendation, we have invited Belfast historian Jim McDermott, author of Northern Divisions, to speak on the topic.  We are disappointed not to have Éamon but we are assured that Jim McDermott will be a great replacement and is sure to deliver a fascinating lecture on the 1922 period. Refunds will be available for those who wish to withdraw from the event following this change.

The rest of our events will go ahead as scheduled, we have Turais Chois Abhann Doinne leading a tour of the village and highlighting the events of 1922 relevant to Cushendun on Saturday 24 September at 11am. Later that day, courtesy of our friends at Imagine Media, we will show the marvellous documentary film An Buachaill Geal Gháireach at 3pm.

On Sunday evening, we will put on a special showing of ‘An Cailín Ciúin’, the beautiful screen adaptation of Claire Keegan’s short story, ‘Foster.’ ‘An Cailín Ciúin’ is the first ever Irish-language film to have won Best Film prize at the 2022 Irish Film and Television awards and has been selected as Ireland’s entry for Best International feature Film at next year’s Academy awards.  We are honoured to show it.

We are delighted to welcome back Kabosh for their award-winning Green & Blue which explores the painful and humorous realities faced by the individuals who patrolled the border during the height of the conflict.

An officer from the Royal Ulster Constabulary in his green uniform and Eddie from An Garda Síochána, resplendent in blue, communicate via crackly radios until an explosive incident forces them to meet across a field only farmers know the location of.

Focusing on what it’s like to be hunted when you’re protecting a man-made line on the ground, the play looks at the societal and human cost of borders.

Green & Blue is based on real-life interviews with former serving officers. CLICK HERE TO BOOK

The Cushendun Reading Circle will re-convene on Wednesday evenings at 7.30pm in the Old Church Centre, beginning on 28 September. Enthusiastic readers who would love the chance to take part in (or just to listen to) a lively, informed and structured conversation about a selection of poetry, prose and drama will be made very welcome.  If you are one of those people, please sign up in advance with Fiona Lynch at 028 217 61461.

What else is on in September