An Evening of Stories & Songs

From Glen to Glen: An evening of storytellling and music 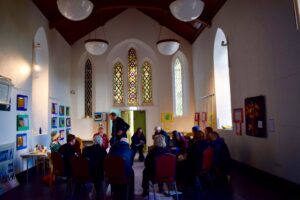 Come along to listen to tales and tunes from International Storyteller Jane Dorfman, who will be joined by local tellers Liz Weir and Stephen O’Hara as well as talented musician Ciaran Mulholland.

Jane Dorfman is a storyteller from the Greater Washington DC area of the United States. Jane tells tales of dutiful daughters and wise women, faithful sons and wicked kings, of magic skipping ropes and Irish heroes, of the angel Elijah and the fools of Chelm. She tells personal stories about her New Orleans childhood and her Maryland neighbours. She revels in stories from the Arabian Nights and tells a few lies as well.

Ciarán Mulholland  is a musician and singer-songwriter who lives close to Slemish Mountain. He has been playing the fiddle since he was 11 years old and is the regular fiddle player for Haste to the Wedding ceilidh band based in Larne and is also part of a new three piece band called Ceolta.

Libraries NI’s Storyteller in Residence Liz Weir has been sharing her  tales for over 40 years and has built up an international reputation, having been a featured teller at storytelling festivals around the world. As a former librarian, she is passionate about getting people to preserve and share their own stories.

Stephen O’Hara is a retired English teacher who owned Ireland’s only Storytelling Cafe, until the pandemic forced its closure. He tells tales from Irish folklore and mythology, and takes a special interest in the lived experience of people in history, and how their lives became woven into the oral storytelling tradition.